6 TV Shows to Watch Filmed in the Greater Toronto Area 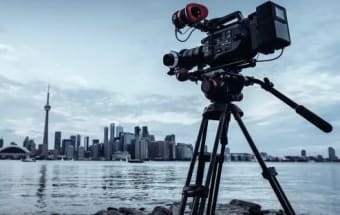 It’s no secret that students love watching TV, which is why we suggest ways to make it educational. Television can be a motivator for reading, especially when popular programs are based on books.  It can also present an interest to explore local geography and history through known landmarks. Students in Ontario are in luck as these 6 series were filmed in Toronto, Hamilton, Cambridge, Mississauga, Orangeville, Oshawa, and Goodwood (several were based on best-selling novels). Watch the following television shows than take a walk and do some real-life sightseeing. It’s a lot of fun, and some great exercise too.

A family of child superheroes must save the world in this Netflix exclusive based on the comic book series of the same name. A great deal of both Umbrella Academy’s two seasons was shot downtown in Hamilton, including the exterior shots of the mansion and the parks. But there’s more than a few scenes that take place in Toronto, Oshawa, and Mississauga, too!  You can find some of the shooting locations here and check out how different they look normally! How many do you recognize?

From IMDB and Netflix: After their father is murdered under mysterious circumstances, the three Locke siblings and their mother move into their ancestral home, Keyhouse, which they discover is full of magical keys that may be connected to their father's death. They say it’s Massachusetts, but it’s actually mostly Toronto and Hamilton.

If your family loves reality TV, The Amazing Race Canada is a great way to see our country! Toronto does feature (naturally!), but if you’ve traveled from coast to coast, you might recognize other locations around the country that you’ve visited. There are three seasons to binge watch, and you can find them on CTV.

If your family likes science fiction, then hurray, you have a great adventure ahead with The Expanse based on the series of novels. Fans of Game of Thrones, you might be thrilled to know the authors of The Expanse were GRRM’s very own writing assistants.  Not only are there lots of strong, diverse women role models in this show (look out for Chrisjen Avasarala), there’s also a lot of accurate science and physics in this hard-boiled space drama, so it’s educational too! Right off, you’re likely to recognize Roy Thompson Hall as the UN building, and there are other campuses and nearby locations that feature prominently on Earth. Catch The Expanse on Amazon Prime.

Have some older kids, or want to indulge in a few shows for grownups? Check these out too!

The Handmaid’s Tale might even be on your child’s reading list this year! The TV adaptation covers Margaret Atwood’s bestselling novel by the same name, the sequel The Testaments, and more. It’s fitting as Atwood is a beloved Canadian author who was born in Ottawa and lives in Toronto. You’ll see Toronto featuring as Toronto, for sure, but you’ll also see Hamilton and Cambridge and some other nearby small towns featuring prominently as parts of Boston and Gilead, before and after the fall. If the Waterford house looks familiar, that’s because it’s the Aberdeen House! And it’s truly amazing to see all the Hamilton churches and buildings that they managed to CGI so compellingly into ruins during the takeover of Gilead.

Have you ever heard of Goodwood? Odds are, you haven’t. It’s a tiny, tiny town about a half hour drive from Toronto, and it is the real-life Schitt’s Creek. Well, a good chunk of it, anyway. The original mansion was located in Toronto, and the motel that the family “lives in” throughout the series is really in Orangeville, Ontario. But Goodwood might be a pleasant place to visit if you’re looking for a hike some trails… it’s smack in the middle of a great deal of protected land, which is part of why Goodwood has remained so tiny. It can’t be developed much more. While there, be sure to visit Annina’s Bakeshop and try their butter tarts, made famous after a testimonial from Annie Murphy from the series.

If you are looking to do more watching and walking, check out our post on classic family films. We hope you have a great time taking a tour of these sites from your favourite shows. If you have time, stop by you favourite library or bookstore on the way home to read the books that inspired them!