Hooked on Books with L.S. Miller and Scott Allen Hill Creators of Lulu and Maxwell 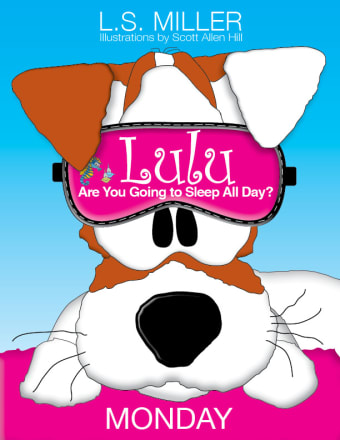 This November, our Hooked on Books author and illustrator team is L.S. Miller and Scott Allen Hill, the creators of Lulu and Maxwell! Both are Toronto born and raised, and they love keeping their children’s books as Canadian as possible.

What is Hooked On Books?

Our team at Teachers on Call loves to read and encourage students and their families to do the same. With Hooked on Books, we introduce our community to the latest children’s book with a behind the scenes author interview to learn more. There is also a chance to win the debut book in a social media giveaway, with a grand reveal of the winner(s) by the featured author themself. A large focus is introducing readers to Canadian authors and illustrators from across Ontario and coast to coast with a mix of emerging and well-known literary talent including Chris Ferrie, Jess Keating and Barbara Reid – just to name a few.

L.S. Miller lives an active life in Toronto, Ontario with her very active Jack Russell Terrier, Lulu. She says that wherever they go people fall in love with her little dog’s big personality, so the best way to share Lulu is to write about her. Lulu, Are You Going to Sleep All Day? Monday is L.S. Miller’s first in a series of five books showcasing the adventures she thinks Lulu may very well be enjoying when left at home alone.

Scott Allen Hill is an artist and illustrator who for many years worked in the photography industry. He lives in Toronto, Ontario with his Yorkshire Terrier named Gizzy. The first book in the Lulu series is Scott's first illustrated children’s picture book. It all came about because of Lulu and her owner, L.S. Miller.

We have 1 signed picture book up for grabs, courtesy of L.S. Miller and Scott Allen Hill.

Rules: Contest open to contestants Canada-wide. This promotion is in no way sponsored, endorsed, administered by, or associated with Facebook.

An Interview with L.S. Miller and Scott Allen Hill

We’re super excited to have L.S. Miller and Scott Allen Hill with us for an interview! Check out their answers to our questions.

Tell us the story of how the two of you ended up creating Lulu and Maxwell together.

L.S.: Scott and I have known each other forever. We lived five blocks away from each other and attended the same schools but didn’t get to know each other until after graduating high school.

A few years back, I asked him to provide some artwork for a wellness blog I had. Scott created cartoon characters of me and my dog. When I started writing the books that had been wanting to escape from my head, those characters evolved into Lulu and Maxwell.

Scott: I thought it would be fun to create a children’s book, but I didn’t have a writer or a story, and I’d never illustrated anything, just created cartoons for fun. All I knew was that I loved to draw and have ever since I was six years old.

L.S. was looking through my photographs one day and stumbled upon a picture of a little girl at an aquarium. The next day, she called me up and read to me for the first time Lulu, Are You Going to Sleep All Day? MONDAY. I was speechless—amazed and so happy. From that day, L.S.’s imagination, drive, and focus propelled us to create our company. I knew at that moment that I’d found the perfect author, and she came up with not just one story, but six. We now had the ingredients we needed to publish a children’s picture book. We put our heads down and went to work. Four and a half years later, L.S. and I have created six children’s picture books that we have fallen in love with, and we hope our readers will as well.

L.S., we know who Lulu is based on! Who is Maxwell’s inspiration?

L.S.: Let’s put it this way. Maxwell and I share quite a few qualities, although I have yet to zip line down from the CN Tower. Even though the stories came from my imagination and feature a lot of people who are close to me (as listed in the dedication of each book), Maxwell can really be anyone who has never let go of imagination’s hand. I just happen to be one of those people.

L.S., what do you love the most about Toronto, and why is it so important to you to make the city such a big part of your books?

I’d have to say, first and foremost, the people. Torontonians make our city a place that others from around the world envy. I live in a very busy part of the city, and in the warmer months I interact with many tourists. Whether it’s during a request to take a photo of them or while I’m helping them with directions to a famous attraction or a lesser-known spot, people are always praising the city and complimenting its citizens as being friendly, helpful, and welcoming.

As a lifelong resident of Tdot, The 6ix, The Big Smoke, and Hogtown, I’ve regularly experienced the same friendly encounters tourists do. Scott and I wanted to put out books as a love letter and a thank you to our beloved Toronto and its citizens by showing off the city in a way that only we could—from the eyes of a cute, silly little dog named Lulu and her human friend, Maxwell.

Scott, what’s your favourite thing to draw when doing your illustrations? (And are you ever planning on going to the aquarium?)

I love to draw Lulu most of all. I have a special relationship with “the real Lulu” and when I draw the illustrated Lulu, a lot of times I have to stop and laugh. Yes, Lulu is based on a real dog named Lucy, a.k.a. Lulu. My illustrated version shows the big responsibilities Lulu has on her mind as her friendship evolves with her human friend, Maxwell. Usually, the adventures of Lulu and Maxwell require protective headgear, as they have no limits as they slingshot into a life full of adventure. The illustrated Lulu is a super-special dog who usually has a lot to say. With a little help from Maxwell, she gets into shenanigans that only a dog and her best friend could imagine when they are exploring the world. These are some of the things I think about that make Lulu and all the characters come to life.

All the fish and sea creatures that were illustrated in Lulu, Are You Going to Sleep All Day? MONDAY came from my adventures scuba diving in Bermuda. I wanted to draw the fish that I saw when I was deep underwater. I didn’t swim with a tiger shark, but I did swim with barracudas! The octopus was so much fun to draw, as I was able to show that they change colour to match their surroundings. Very cool. Saying this, I would love to visit the aquarium in Toronto and look forward to just that in the near future.

What’s the most important thing about working together as a team that you think all kids should know?

Scott: I feel that respect for each other is the most important thing about working together in business and in life. Listening skills are also high on the list; you allow others to have input, and listening to each other also displays mutual respect. People have the opportunity to talk about their ideas as well as yours, and maybe the ideas will come together and become even better. Lulu and Maxwell are more than L.S. and me. We have two other partners in our business who focus on the behind-the-scenes aspects. Saying this, I feel that it takes like-minded people who all have the same goals and drive to make the magic happen. Treating other people with respect and really listening will take you to where all your dreams become reality. And certainly not the least important thing is having fun in everything you do!

L.S.: That’s a great question.  I think that the most important thing about working together as a team is realizing that there’s no I in “team.” If everything’s done by just one person, then you lose out on all of the great ideas others have to contribute.

If Lulu just wanted to walk where she wanted to walk with Maxwell, then she’d miss out on all of the places and people Maxwell could show her. And if Maxwell didn’t allow Lulu to have a “switcheroo day,” then she never would have met Lulu’s friends and had a huge rock concert on Yonge St. It was when they worked together as a team that the adventures of the day were better than either of them could ever imagine.