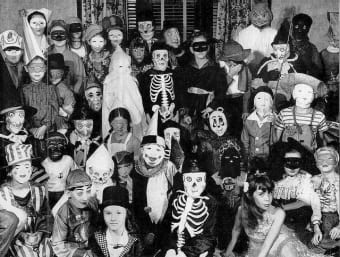 Would you believe us if we told you that Halloween is a holiday steeped in over 2000 years of history from all over Europe? It’s true! Check out these spooky Halloween facts to see how learning history is this much fun!

How did the Celts, who lived in what’s now modern-day England, and the Romans from Italy manage to get together that long ago, you might be wondering? The Roman Empire at its peak (27 BC – 395 AD) spanned a huge part of the lands around the Mediterranean Sea, from Iraq and Saudi Arabia in the east to what they called “Britannia.” They held Britain for about 400 years and had a significant impact on the Isle’s history.

Historians believe that during this period, two Roman festivals – Pomona and Feralia – became incorporated into Celtic fall celebrations including Samhain (pronounced sow-en). Pomona’s symbol was the apple; she was the Roman goddess of fruit trees and orchards.

3 – ‘Mumming’ is probably the ancient origin of trick-or-treating

During Samhain, people originally used to dress up to scare away unwelcome spirits. Centuries later, the custom evolved into mumming: practicing antics in exchange for food and drink.

The Celts celebrated several holidays in the fall and early winter; Samhain was only one of them. But during Samhain, they felt the boundaries between the living and dead’s worlds became blurred, and ghosts could return to visit – or cause trouble. But the Celts also associated the colors of black and orange with these fall time traditions, and harvest bonfires… which incidentally may have stirred up many bats!

If you love the tradition of making Jack-O’-Lanterns, you might be surprised to know that big turnips and potatoes were the first fall vegetables to be carved – not pumpkins! Stingy Jack was a figure in Irish folklore, and his ghost carried a coal in a carved-out turnip as it wandered. So, in Ireland and Scotland, people made their own versions of Jack’s lanterns to frighten away Stingy Jack using turnips and potatoes.

6 – The Irish brought Halloween with them to America

There was a surge of Irish immigration to the United States in the mid-1800s, and that was due to a sad event called the Irish Potato Famine or sometimes The Great Hunger. When the Irish went to the U.S., they brought Halloween traditions with them… and incidentally discovered that the native fruit, the pumpkin, made for amazing Jack-O’-Lanterns.

7 – The Puritans are responsible for superstitions about black cats

The Puritans brought Protestant beliefs to their colonies in America, and they believed some of the ancient legends that witches could transform into black cats. They demonized black cats for many years because of this, and even after witch hunting faded into history, black cats retained the stigma of being bad luck – which often means they’re less likely to be adopted from shelters, too. (If you’re looking to adopt a pet, consider a black cat! They need love.)

It’s amazing how holidays can continue to grow and evolve, isn’t it? Until sometime in the 1950s, traditionally trick-or-treaters received cakes, fruits, nuts, coins, and toys – not candy at all. But in the 50s, candy makers began to promote candy for Halloween, and that quickly took over!

Vox estimated that a whopping THREE Titanic’s worth of Halloween candy were sold 5 years ago. Isn’t that a staggering number?

Whatever your observances, you can see that the end of October and beginning of November are a great time to celebrate the changing season and remember history. Happy Halloween!