This month, our Hooked on Books author is Chris Ferrie! He's channeled his passion for math and science into a series of books for children of all ages, with the aim of getting them interested in these often challenging subjects from an early age.

What is Hooked On Books?

Our team at Teachers on Call loves to read and encourage students and their families to do the same. With Hooked on Books, we introduce our community to the latest children’s book with a behind the scenes author interview to learn more. There is also a chance to win the debut book in a social media giveaway, with a grand reveal of the winner(s) by the featured author themself. A large focus is introducing readers to Canadian authors and illustrators from coast to coast with a mix of emerging and well-known literary talent including Chris Ferrie, Jess Keating and Barbara Reid – just to name a few.

About Our Author: Chris Ferrie

Math and science have complicated relationships with many people. Generally, though, the experts agree – early exposure may foster a lifelong love of these two subjects!

Indeed, author Chris Ferrie believes that there may be no age too young to learn. He’s written a series of math and science books aimed at infants based on subjects most would associate with high school.

We have two 3-book packages up for grabs, courtesy of Chris Ferrie and Raincoast Books!

Participate in our giveaway by following us on Facebook commenting on our post: What kind of math or science do you like best? Is it astronomy? Algebra? Quantum physics? Let us know, and you'll be entered to win!

Rules: Contest open to contestants Canada-wide. This promotion is in no way sponsored, endorsed, administered by, or associated with Facebook.

An Interview with Chris Ferrie

We’re super thrilled to have had Chris Ferrie with us for an interview! Check out his answers to our questions.

Many parents might double-take at your series of science books for babies! Why were you inspired to bring concepts like quantum physics and probability to such a young audience instead of an older one?

I certainly would not have written a children's book had I not had children of my own. Being a scientist myself, I was always on the lookout for science books to read to my young children. When I saw that someone else had written some maths books for children and that they had self-published them, I started to think about writing about my area of expertise. The self-publishing option was key because this needed to be a hobby that would allow me to still focus on growing my academic career.

When the title Quantum Physics for Babies popped into my head, I knew I had something that would at least cause some doubletakes! With all the positive feedback from the first book, I was really inspired to continue. As my children outgrow picture books (can you ever outgrow picture books, though?), I am starting to write for older audiences.

Share a little bit about your love of science – how did you decide that you wanted to work in quantum physics and computing?

I remember being interested in science when I was young. I wouldn’t have said I loved it (not more than video games anyway), and it was certainly not something I thought I would do. I did always love mathematics as far back as I can remember. And then I was inspired to choose math and physics to study at university after 12th grade physics, where I found out that I could use all this math I loved to solve real tangible problems. I was in awe, not of science, but of the power of mathematics.

What an undergraduate physics degree tries to teach students is intuition. However, what you can be tested on is mathematics. Studying both was a huge advantage — so much so that I never really felt the need to rely on intuition. I slowly came to believe that physics was nothing more than mathematics. After chatting with some professors of quantum physics about it, I learned of a research program to show just this — that all of physics, the whole universe even, is one big mathematical computation. Wow! How could you not be seduced by that idea?

How do you think a parent can best support a child who is interested in math and science, especially if they are not well-versed in it themselves?

One of the saddest things I see is parents who are relieved when their child brings home a bad math test. It’s almost as if they dread having to look at more and more complicated homework and prematurely ending the math journey saves them this horror. They say, “Oh, it’s okay, I didn’t like math in school either and things worked out for me — maybe you are just not a math person.” No! Everyone is a math person. If you are not currently versed in math and science, you get to take that journey with your children. That's a gift more than a burden.

Public facing scientists give the illusion that we have some encyclopedic knowledge of science and it is easy to quickly answer any question on any scientific topic. How big is Jupiter? How many stars are in the Milky Way? Why is a giraffe’s neck so long? How does an iPad’s touch screen work? I don’t know the answer to any of these! But I am confident that I could find out. And that’s what I would suggest parents can do for their children — give them the confidence to ask questions and explore the unknown for the answers.

It’s OK to play favourites… which one of your books do you love the most?

Tough question! Of course, Quantum Physics for Babies was my first book and the one that started it all. So, I will always have an affinity for it. But that’s cheating, right? My current favourite would be There Was A Black Hole That Swallowed The Universe because it’s so darn cool! The black hole swallows up everything in the universe. That’s kind of grim — so I wanted a hidden story that rebuilds the universe. But it definitely had to be hidden for the surprise factor. I’ve seen things hidden by glow-in-the-dark ink before, but it was never really hidden — you could always see the ink, even if it wasn’t glowing. Sourcebooks tested a lot of different options and found one that turned out amazing and only appears under blacklight. Some still don’t know there is a completely different story on each page that plays out in reverse!

Tell us about your latest book!

The latest book is Climate Change for Babies. This topic was way outside my comfort zone when we started. It is not my area of scientific expertise. And, it is an immensely controversial subject (though, it really shouldn’t be). So, I enlisted another great scientist, Dr Katherina Petrou, to collaborate on it. I think it turned out great and I hope it shows not only the science behind climate but also motivates people to think more and act on this incredibly looming threat.

We hope you enjoyed this as much as we did! Be sure to visit our Facebook page where we will be giving away TWO sets of three books to lucky Canadian residents, courtesy of Raincoast Books, including I Heart Pluto, My First 100 Art Words, and Let’s Ride a Wave! 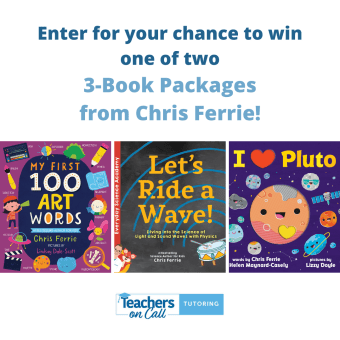