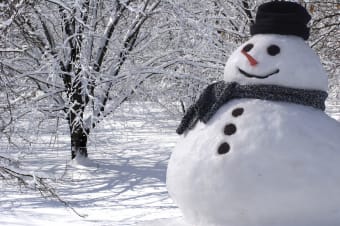 In this post, Teachers on Call shares 10 cool winter science facts to get students excited about learning.

We hope everyone is getting excited for the winter season! It’s one of our favourite times of year - holidays, family, snow… what’s not to love? The winter months are a science-lovers paradise, too. So many things change, and there are lots of answers to be found as to why. We’ve got some wonderful winter science facts to share with you to get students excited about learning this season!

1) The reason it gets darker earlier is because sunlight is hitting the southern hemisphere more directly.

During the winter season, the Earth’s 23.5-degree axial tilt means that our orbit makes the sunlight more focused on the southern part of the globe. Some parts of the northern hemisphere will get very little sunlight – or stop seeing it at all!

Boy, that feels like a long time away already, doesn’t it?

3) The Earth is actually closest to the sun in December!

Though it might seem counterintuitive, the Earth’s orbit typically brings it the closest to the sun during the coldest period of the year. Our cold weather comes from the decreased sunlight.

4) Some insects survive the winter by producing their own version of “antifreeze.”

The scientists call these produced chemicals “cryoprotectants” which make the insects less likely to freeze in cold weather. There’s several types of cryoprotectants, but the most common in the insect world is glycerol.

5) Geese (and many other migrating birds) fly in a V to conserve energy.

When birds fly in this formation, it decreases the wind resistance, meaning they can fly for much longer before stopping to rest. It also makes it easier to keep track of each other in the group!

This is due to ice having a natural hexagonal crystalline structure. But if you look very carefully, you might find a 12-sided snowflake, or a 3-sided one. These would have formed under different situations that allow for unusual formation.

7) The average snowflake falls at a little over 4.8 kilometers per hour.

Bonus fun fact… That’s about how fast the average walking speed is for an adult!

Any child might tell you that they know already some snows are not great for making snowballs or snowmen! The different kinds of snow are characterized by the amount of water in their consistency (how wet they are). It ranges from dry snow to slush.

9) Nuts and seeds are not the only things an animal might store for the winter.

Shrews store their favourite foods alive for the winter… insects rendered comatose from their bite. And red squirrels make a “mushroom jerky” to eat later!

10) Nobody knows when the first snowman was made for sure.

But the author of “The History of the Snowman,” Bob Eckstein, says the earliest known drawing of a snowman is in a book from 1380 – well over 600 years ago!

For more fun reading, check out the Smithsonian Magazine’s guide to using physics to build a snowman!