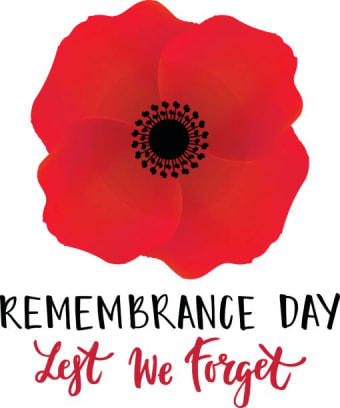 Remembrance Day is an important event for Canadians, as this is the day that we get together to remember those who lost their lives during World War I. Many of us already know that we wear a poppy to honor the dead, and that we do so because of a famous poem, but here’s 11 other interesting historical facts about Remembrance Day that you might not have known.

John McCrae, who wrote “In Flanders Fields” was born and lived in a place many of us have visited in person – right in Guelph. He was born on November 30, 1872.

2. His poem got international recognition.

Because of his poem, the poppy was not only adopted as the Flower of Remembrance for Canada. Britain, France, the US, and other Commonwealth countries also use the poppy to symbolize the lost of WWI.

3. You can still visit the limestone cottage where he was born.

McCrae House was turned into a museum. Even on Remembrance Day, you can visit (although with COVID restrictions, there is limited ticketed entry).

He passed away in January of 1918 from illness, likely pneumonia, and is buried in Wimereux Cemetery, near Boulogne, France.

5. World War I had many different names.

A few of the most common were ‘The War to End All Wars’, The War of the Nations, WW1 and ‘The Great War’.

6. It was triggered by the assassination of the Archduke Franz Ferdinand of Austria and his wife, Sophie.

How did an assassination in Austria manage to escalate into such a large war? There was a tangle of alliances made between countries in Europe to maintain a balance of power. Unfortunately, the alliances ended up pulling many other countries in.

7. World War I was a truly global war.

Over 30 nations declared war between 1914 and 1918, and 65 million men volunteered or were conscripted from places as far away as Australia and the United States.

The youngest was a boy named Sidney Lewis, who was only 12. He had lied about his age to join the service. To be fair, when they were caught, their commanders sometimes sent them back home!

The money goes to support veterans and their families. With the pandemic going on, however, the Royal Canadian Legion has been struggling for funds. You can help support them by buying a digital poppy.

That’s why 11 is such an important number for Remembrance Day.

In Flanders fields the poppies blow

Between the crosses, row on row,

That mark our place; and in the sky

Scarce heard amid the guns below.

We are the Dead. Short days ago

Loved, and were loved, and now we lie

Take up our quarrel with the foe:

To you from failing hands we throw

The torch, be yours to hold it high.

If ye break faith with us who die

We shall not sleep, though poppies grow