How Teachers on Call is responding to COVID-19. Learn More

We Can’t Travel, So Make Your Favourite Theme Park Recipes at Home This Summer 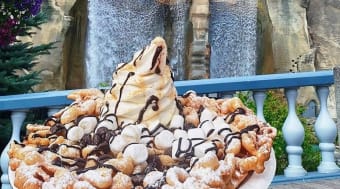 The country might be opening up some, but for now, theme parks are still closed indefinitely, so we’ll probably all be spending summer mostly close to home this year. Don’t feel too sad. One lost opportunity affords a bunch of new fun learning lessons and happy family memories! (And you know how much we love baking and cooking for not only being practical math, but also practical life skills.)

When COVID first struck, a lot of theme parks released some of their iconic recipes to the public so we could still get a little taste of it at home. Now that flour is easy to find, and summer and Father’s Day are upon us, we think it’s the perfect time to dust some of these recipes off and try them out.

The baking world has been going crazy over donuts now that they’ve mastered sourdough. Homemade fried donuts are delicious, but why not one-up the trend by making the Canada’s Wonderland Funnel Cake instead?

Quick Baker’s tip: don’t add TOO much oil to the pan and pour in a spiral. If the dough floats and you pour it all in one spot, you’ll end up with a hard to cook glob rather than a pancake-shaped funnel cake.

Just like biscotti, these Cookie Fries are made for dipping, and they’re great for accommodating people with milk and egg allergies or those who are following a vegan diet. If you want to go for the most authentic experience, at the Beaches & Cream Soda Shop, they serve their Cookie Fries with marshmallow cream, strawberry coulis, and chocolate sauce.

The TODAY Café at Universal Studios decided to release their fun twist on the ever-popular grilled cheese. Some may have tried to replicate the Big Apple Grilled Cheese before, but it turns out the secret is all in the choice of cheese and roasting the tomato.

It’s summer and we’re all looking for something cool, which is why the Dole Whip is such a great choice. Both Disney and Dole Whip released two versions of the same whipped pineapple dessert that makes such a great treat on hot days. Disney’s recipe uses ice cream, but Dole’s recipe, like the original, is dairy-free (and reportedly much closer to the one at the parks).

Okay, so it might not TECHNICALLY be a theme park, but if we’re comparing popular summer activities that involve standing in line and having great iconic food, Ikea has more than a few similarities to one. Enter the Ikea Meatball recipe, which is even easier to assemble than the furniture.

If you love these recipes, dozens more places have released their iconic recipes online! Challenge yourself by seeing which ones live up closest to the real thing. Having fun in the kitchen is a great way to spend time together without the screen, to practice reading and math, and work on beating the summer slide. Be sure to also check out our other non-book ways to encourage more reading this season for extra activities for everyone.

Teachers on Call shares activities that will keep little minds active on hot days, and some of them are great choices for shady backyard play too

3 Fun and Educational Ways to Celebrate the Olympics at Home

Get yourself and your child in the Olympic spirit and get ready to cheer on Team Canada with these three fun and educational activities.

Teachers on Call shares activities that will keep little minds active on hot days, and some of them are great choices for shady backyard play too